The long road to a Titan storm 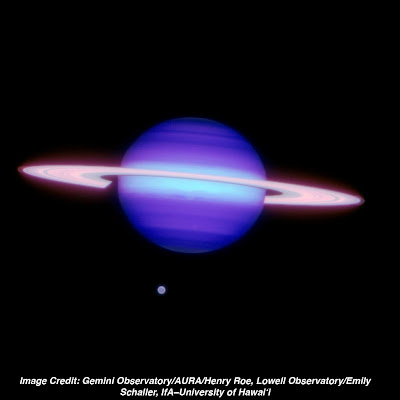 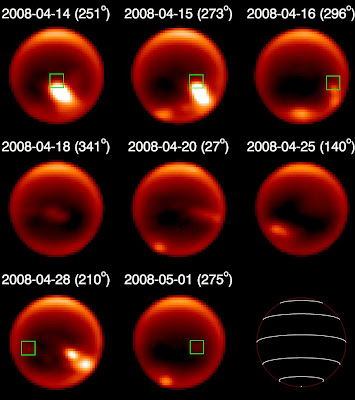 The scientific paper that Emily wrote along with Henry, Tapio, and I that appears in Nature describes the big cloud outburst and its scientific implications. And the implications are pretty fascinating. This big cloud outburst – the biggest ever seen – began in the tropics of Titan, where it has been speculated that clouds, if they ever form, should be weak wispy things. The tropics are where, of course, the Huygens spacecraft that landed on Titan took dramatic images of things that look like stream beds and shorelines and carved channels. How could those be at the equator if there are never clouds and never rain? People asked.
This discovery doesn’t actually answer that question, because we don’t know why there was a huge outburst of clouds in the tropics of Titan. But it does perhaps answer that lingering question: How could those be at the equator if there is never rain? Because there is rain.
Now, however, I am going to allow myself to speculate a bit more than we were comfortable speculating in the scientific paper. I am going to ask: Why? Why were there clouds in the tropics? Why did they appear suddenly at one spot? What is going on?
What I think is going on (again, I warn you, rampant speculation follows…) is that Titan occasionally burps methane, and I think Emily found one of the burps. For many years scientists have wondered where all of the methane in Titan’s atmosphere comes from, and, I think, here is the answer. The surface occasionally releases methane. Call it what you want. Methane geysers? Cryovolcanoe? Titanian cows? Whatever happens, the methane gets injected into the atmosphere and, at that location, instantly forms a huge methane cloud. Massive rainout ensues downwind. The stream channels, the shorelines, and everything else in the otherwise desert-seeming regions are carved in massive storms.
Evidence? Evidence? Where’s the evidence? You scream. Fair enough. I am giving you a snapshot of how science is done, and, at this point, this is the hypothesis stage. Or hunch. Or speculation. This hunch is the type that then guides what we go off to try to observe next. What will we see? Will the spot Emily found burp again? That would be pretty striking confirmation. Will other spots blow? (I should mention that we do indeed think we saw a different spot burp a few years ago).
At this point we have observed Titan well for about 7 years, from the winter southern solstice until the northern spring equinox, which actually just occurred last week, the terrestrial equivalent of late December to late March. What will the rest of the year reveal? We’re still watching, waiting. Maybe in 23 years, when we’ve finally seen an entire season, we’ll call it a day.
Posted by Mike Brown on Wednesday, August 12, 2009
Email ThisBlogThis!Share to TwitterShare to FacebookShare to Pinterest
Labels: Caltech, observing, publications, Titan